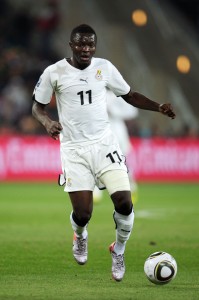 Sulley Muntari is losing the battle against full recovery and could be excluded from Ghana’s squad for the 2013 Africa Cup of Nations.

The 28-year-old has been in the treatment room since he suffered a knee injury during a kick-about with friends in his native country in June.

The AC Milan star was expected to return to the pitch early November but aggravated the problem at the Rossoneri training ground.

Ghana coach Kwesi Appiah expected to name his final squad before Christmas and there are doubts about the inclusion of the experienced midfielder.

The player’s agent Federico Pastorello has revealed his client would return to the pitch by the end of December.

“We hoped he could recover in a short period but the new period for recovering is till the end of December and we hope it remains so,” Pastorello said.

“Sulley is clearly disappointed, he worked hard to get back to fitness and was under the illusion that he could play again.”