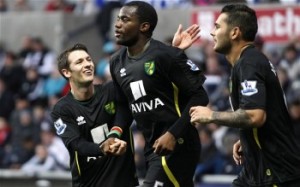 A Swansea fan was arrested for allegedly making a racist gesture toward Norwich defender Sebastien Bassong during a Premier League match on Saturday.

The incident took place after Robert Snodgrass scored Norwich’s fourth goal in the 77th minute to clinch a 4-3 win in south Wales.

Bassong, the Cameroon international who had scored earlier in the game, went to celebrate with his teammates but quickly motioned to referee Howard Webb that he believed he had been the victim of a racist gesture.

“Within 10 minutes of the report the stewards had got hold of the TV footage, replayed it, identified the alleged person in question and within that period he was arrested for a racially aggravated public order offense,” Swansea said.

“The matter is with the police, but from the club’s point of view we abhor racism and we have worked hard over the years to make this a family club. We will look into it.”

“It is disappointing because it was a wonderful football match out there today, but Swansea have dealt with it in the correct way,” Hughton said.

In the past year, there have been several instances of racism by fans at Premier League matches.