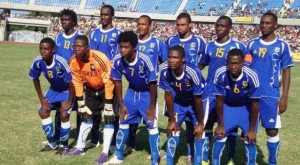 Zanzibar completed its fourteenth participation to the Cecafa tournament by winning the bronze medal on Saturday. It was about the opening match of the final that opposed Kenya to the host country Uganda. Zanzibar got beaten at the shootouts with 6-5.
It was for Tanzania to open the score since the 19th minute of the game. Mwinyi Kazimoto found the flaw in the Zanzibari defense. The Kilimandjaro Stars were feeling victorious while the match was ending up with the score of  one-nill.

But it was without counting on Abdallah Othman who in the 85th minute, played a trick on the Tanzanian goal. The last score was 1-1.

During the shootouts, after 7 temptations, Zanzibar scored 6 whereas Kenya lost 2 kicks by Mwinyi Kazimoto and Kevin Yodani.
Zanzibar therefore, Zanzibar handled 10 000 US Dollars as a premium booked for the third place of the competition.
Read also: