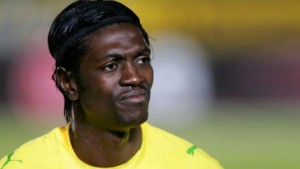 Togo midfielder Mani Sapol believes captain Emmanuel Adebayor will play at the 2013 Africa Cup of Nations despite quitting the Hawks.

The Tottenham striker quit the national team earlier this week in a row over bonuses for the squad.
Adebayor took the decision with just eight weeks before the start of the Africa Cup of Nations in South Africa citing chaos in the federation.
This comes after players failed to receive their bonuses when they played in the friendly against Morocco in Rabat last month.
But Sapol is confident their captain will return to the fold for the tournament despite his stand-off with the Togo FA.
“Adebayor told the truth. He is a sincere person who does not hide what is in his heart,” Sapol said.
“I know him very well. Even if he temporarily suspends his association with the national he will eventually come back to participate in the CAN 2013, because he loves his country.”