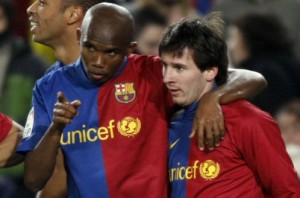 Samuel Eto’o and Lionel Messi played together for several years in FC Barcelona. He has even been  in his shadow. But Samuel Eto’o dedicated a particular admiration to Lionel messi.
The Argentinian Elf record breaker, has received praise from the Camerounian :

“This is a God as a person and more as a player. I hope he will win this World Cup thet is being denied to Argentina. I praise all  the gods in the world to bless him. May they grant him this opportunity. I knew him when he was a kid, I played with him and I can only wish him the best because he is a good guy. “