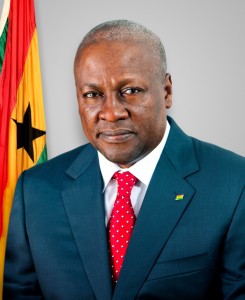 The president of Ghana, John Dramani Mahama has urged players of the Black Stars to do whatever it takes to win the upcoming African Nations cup to be hosted by South Africa later this month.

“We have come close to winning the trophy for some time now but I think this year would be our year. Let’s not take any country for granted and let’s not lose focus on the ultimate prize.

I urged you the players to do your best and die for this Country during the tournament and I promise that when you (Black Stars) are able to deliver the trophy come February 10, the government would reward you accordingly.”

President Mahama was hosting the Black Stars and some management members of the GFA at the Castle Osu ahead of their pre-tournament camping in the United Arab Emirates later tomorrow.

Captain of the Black Stars, Asamoah Gyan who spoke on behalf of the players thanked the President for hosting them and assured him that he and his colleagues are determined to end Ghana’s title drought at the Nations Cup.

Gyan promised to be the first captain in the last three decades to lift the Nations Cup trophy but admitted that the challenge is a daunting task and that utmost support from the entire Ghanaian public would be needed to achieve the goal.

Immediately after the event the players moved to the Teshie Orphanage where they made a donation of various items to the school to help in the upkeep of the orphans. 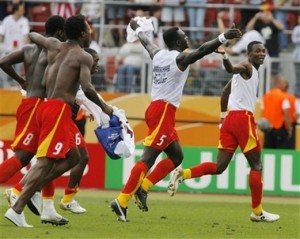 The Black Stars also paid a visit to the offices of Zoom Lion, to launch the ‘A Clean Ghana is a Victorious Ghana’ campaign to promote cleanliness and healthy living among Ghanaians as part of the team’s social responsibility programme.

Earlier in the day, DSTV also made a presentation to all the players of the Black Stars players and technical team.