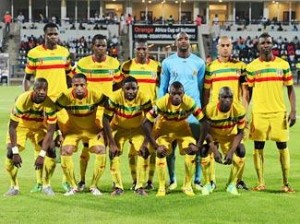 Mali coach Patrice Carteron announced a provisional 28-player squad on Thursday for the Africa Cup of Nations set to take place in South Africa from January 19 to February 10.

There is also a recall for Paris Saint-Germain midfielder Mohamed Lamine Sissoko who has not played for the national team since the 2010 Africa Cup of Nations before going into temporary international retirement.

French-based defender Molla Wague, who plays for Caen, is called up for the first time although Carteron will trim the squad to the final 23-player list on January 9.

The team, who finished third at the 2012 tournament, where they were beaten in the semi-finals by Ivory Coast, will begin their preparations in Bamako until January 9 before moving to their Group B base in Port Elizabeth where they are pooled with Ghana, Democratic Republic of Congo and Niger.