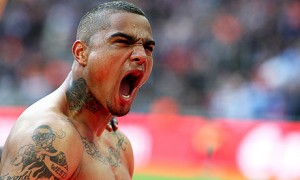 An exhibition game at fourth-tier side Pro Patria was halted in the first half when Milan’s midfielder Boateng kicked the ball at the stand in protest and walked off the pitch, soon followed by his team-mates.

With the Italian Football Association launching an immediate inquiry into Thursday’s unfortunate incident, support continues to come in for Boateng, Muntari and the rest of their black colleagues.

He said: “We salute Kevin-Prince Boateng for his actions and his team-mates for their support. This is not the first time a player has walked off in Italy – if the situation continues it may not be the last”.

“Italy, as much as any country in Europe, has a serious problem of racism to deal with. Football infrastructure is in need of renewal and at serious odds with the changing nature of Italian society. We look forward to strong action by the FIGC (Italian FA).”

A number of players also showed their support for Boateng on Twitter.

Patrick Vieira, who played for Inter Milan, tweeted: “AC Milan is an example to all. It’s a strong and bold statement to make by the club and players.”

Manchester United’s Rio Ferdinand tweeted: “If the stories about KPB walking off the pitch with teammate’s after being racially abused are true,fair play to him..well done, UefaStandUp”

While Manchester City’s Vincent Kompany said: “I can only salute Milan’s decision to leave the pitch. Also noted that the majority of the fans were completely supportive of the players.”