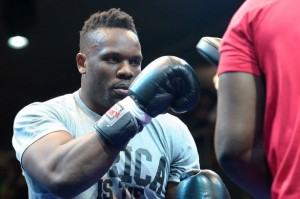 Dereck Chisora is re-applying for his British boxing licence after it was revoked following his disgraceful brawl with David Haye in Hamburg last February.

The London heavyweight settled his differences with Haye at Upton Park in July when he was stopped in the fifth round of an entertaining grudge match.

That controversial fight took place under the auspices of the Luxembourg Boxing Federation but Chisora, 29, will now make his case to the British Boxing Board of Control (BBBoC).

If successful, he plans to make his return on the undercard of George Groves’ clash with Mohamed Ali Ndiaye for the vacant European super-middleweight title. World champions Nathan Cleverly and Ricky Burns will also be in action on the same night.

Sportsmail understands that the BBBoC are yet to receive Chisora’s application and therefore cannot predict when a decision will be reached.

But after stripping him of his licence in March, the Board’s general secretary Robert Smith said: ‘There has been no set period when (Chisora) can re-apply for his licence.

‘He no longer is a licence-holder with the British boxing board. Any person is allowed to re-apply at some point. Obviously the board will consider any application.

‘What happens in the future, I do not know. But what we’re obviously talking about is a few years.’

Prior to his bust-up with Haye, Chirosa slapped Vitali Klitschko at the weigh-in for their WBC world heavyweight title clash before spitting in Wladimir Klitschko’s face prior to the first bell. 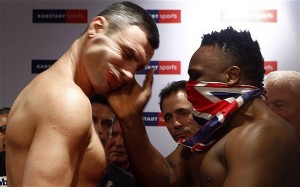 It was at the post-fight press conference that he brawled with Haye, having lost to Vitali by unanimous decision.

Inside the ring, Chisora has lost his last three fights including a hotly-debated split-decision defeat to European champion Robert Helenius in Finland. He also surrendered his British and Commonwealth titles to Tyson Fury at Wembley Arena in 2011.

Should he be granted his licence, Chisora could target an all-British clash with David Price who faces American Tony Thompson in Liverpool on February 23.