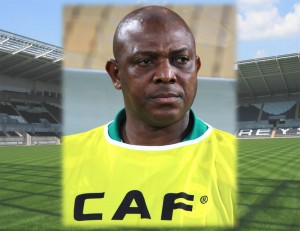 The man on the photo is not an official of CAF but he is the coach of the Super Eagles of Nigeria, Stephen Keshi.

However, how did he happen to put on a chasuble of the CAF during the 29th edition of Afcon?

The scenario occurred during the meeting that pitted Nigeria to Burkina Faso. While Burkina Faso has flown the green jersey, the coach of Nigeria wore a green T-shirt.

Referees during the pre-match formalities told Keshi to change his tunic. And not to be confused with the Stallions, the former coach of Togo has brought this CAF chasuble.

Coincidentally, his counterpart, Paul Put was in the same situation that had not escaped to Africa Top Sports.