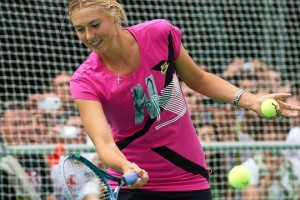 On Sunday night in Los Angeles, Maria Sharapova a legend on the court and a megastar off of it, stepped out and shone at the Vanity Fair Oscar Party

For Maria Sharapova, the time between Premier-level tournaments in Doha and Indian Wells is taken up by hard-hitting practice sessions on the court, intense fitness work off the court and, of course, stepping out at the Vanity Fair Oscar Party in Los Angeles.

A megastar of Sharapova turned heads in her Amanda Wakeley dress, which was complemented by Isharaya earrings, an Alexander McQueen bag, Manolo Blahnik shoes and Katherine Sultan cuffs. From her sleek, modern, chic hair to her young, classic make-up, the four-time Grand Slam champion and former World No.1 was shining very brightly in the City Of Angels.

“The inspiration for last night’s look was very sleek and modern,” Sharapova said. “I wanted to go with a classically stunning dress that has a surprise ornamentation of back jewelry. Perfect for a perfect LA evening at the Oscars. The glamour of the Oscars is like nothing else. The Vanity Fair Oscar Party is such a star-studded celebration that I love seeing the stunning fashions on the red carpet.”