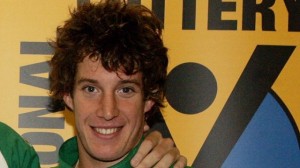 SA Olympian Troyden Prinsloo has smashed the record for the icy 7.5km Atlantic crossing from Robben Island to Blouberg.
Prinsloo, wearing only a Speedo costume, cap and goggles, swam a time of 1:23:48 – nine minutes faster than the previous record held by German elite swimmer Christof Wandratsch (1:33:11) set in 2005.
Prinsloo recently placed a close second behind four time winner Chad Ho at the world’s biggest open water swim, the Midmar Mile and has his sights set on the 10km race at the Rio Olympics in 2016. He placed 12th in the 10km at London 2012.
Seconded by world renowned, veteran cold water swimmer, Ram Barkai who has mentored him in coping with icy water, Prinsloo set off from Robben Island on Wednesday morning at a lighting pace. He slowed down after 3km due to the impact of the cold water which averaged around 15°C.
Prinsloo said he was “over the moon.”

“I’m very happy with this achievement. Conditions were good and I gave it my best. I want to thank everyone who assisted, particularly Speedo for backing me.”