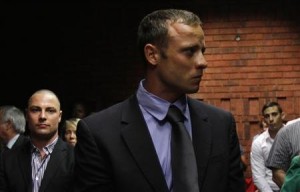 A spokesman Oscar Pistorius said Wednesday that the products found in the home of the athlete after killing his girlfriend are used for “muscle recovery.” A product by that name also is sold as a sexual enhancer.

Testis compositum is marketed by some online retailers in both oral and injectable forms as a testosterone booster and sexual performance aid that contains the testicles, heart and embryo of pigs, among other ingredients. Some online retailers also say it can be used to treat fatigue.

At the Paralympian’s bail hearing last week in the shooting death of Reeva Steenkamp, police said they found needles in Pistorius’ bedroom along with the substance, which a detective initially named in court as testosterone. Prosecutors later withdrew that statement identifying the substance and said it had been sent for lab tests and couldn’t be named until those tests were completed.

Pistorius spokeswoman Lunice Johnston said in an email to The Associated Press that the athlete’s lawyers had confirmed that the substance is Testis compositum.

In the email, Johnston wrote that the product was being used “in aid of muscle recovery.” She did not say whether the substance was the same as the product that is sold as a sex enhancer.

In court, Pistorius defense lawyer Barry Roux said the substance was not banned by sports authorities.

The World Anti-Doping Agency said its science department had already been made aware of the substance and that it wasn’t banned.

“It would appear to be a homeopathic treatment, and these treatments are not prohibited by the list,” WADA said in a statement to the AP.

Arne Ljungqvist, chairman of the International Olympic Committee’s medical commission, told the AP he had not heard of the product but that it sounded like “a real cocktail, all pointing in the same direction, namely having something to do with testosterone.”

“This sounds to me like something that needs to be analyzed in order to make sure what it is,” Ljungqvist said in a phone interview. “You cannot ban something simply on claims and names. It needs to be looked into. Even saying that it is testosterone boosting, it could contain some precursors. It needs to have some analysis.”

Pieter Van Der Merwe, director of South Africa’s Doping Control Laboratory in Bloemfontein, declined to comment on whether a sample from Pistorius had been sent to that laboratory for testing.

Pistorius was charged with premeditated murder in the Valentine’s Day shooting death of Steenkamp. He says he shot her by accident after mistaking her for an intruder in his home. Prosecutors allege he intended to kill her.

Police took Pistorius for a medical examination when he was arrested on Feb. 14, which included blood-alcohol tests, they said. The substance found in his bedroom was also being tested by police, who haven’t released results.

Pistorius, a multiple Paralympic champion, underwent two doping tests in London last year around the Paralympics, the International Paralympic Committee has said. He tested negative for any banned substances in both tests in August and September.

A product called Testis compositum is made by Biologische Heilmittel Heel GmbH, based in Baden-Baden, Germany. The company website says it is one of the world’s leading makers of homeopathic combination medications.

A U.S. subsidiary, Heel USA Inc., advertises the product in tablet form only and spokeswoman Joan Sullivan said she didn’t know if injectable versions are sold in other countries. Heel USA’s website says the product provides temporary relief for men’s “sexual weakness” and lack of stamina.

Charles Yesalis, a Penn State professor emeritus and expert on steroid use in sports, said animal steroids likely wouldn’t have an athletic performance-enhancing effect unless taken in huge quantities. Even so, he said many elite athletes would be wary of using such supplements because they can be laced with banned substances and few would want to risk it.