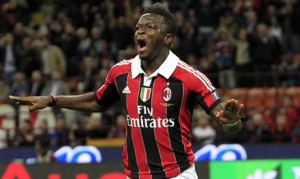 The midfielder of AC Milan could make his return to rejoin the Black Stars for next month’s 2014 FIFA World Cup qualifier against Sudan at home..

The AC Milan player has been in top form recently and should bolster the team for their important assignment.

The 28-year-old star was overlooked in Ghana’s squad for the 2013 Africa Cup of Nations as had just began recuperating.

Muntari maintained his performance in last Sunday’s Milan derby against Inter, his former side, which ended 1-1 at the San Siro.

Ghana coach Kwesi Appiah, who is seeking for an improve display after a disappointing spell at the Nations, is expected to invited the experienced player.

Muntari has shone after recovering from a serious knee injury sustained during the off season that sidelined him for five months.

Meanwhile, Muntari says he is enjoying his time at AC Milan after recovering from a knee injury that kept him out for a portion of the season.

The midfielder picked up the injury while playing football with friends during last summer holidays in Accra.

But since returning in December, the Ghana international has come on in leaps and bounds.

His top contribution to the club came in the first leg of Milan’s UEFA Champions League round of 16 tie with Barcelona.

He scored the Rossoneri’s second goal to provide a steeper advantage hearing into the second leg.

“This jersey is already a part of me. It’s in my blood,” Muntari said.

But his three goals in 13 appearances earned him a three-year permanent deal in May.