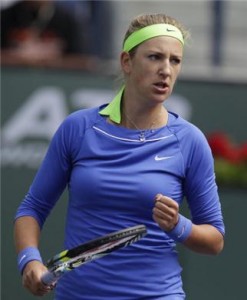 One would think there’s a lot on Victoria Azarenka’s mind coming into Indian Wells – undefeated this season, defending champion, No.1 seed – but for the Belarusian, there’s really just one focus.

For Victoria Azarenka, 2013 has started off much the same as 2012 – unbeaten in January and February, and coming into Indian Wells with expectations about staying unbeaten. So how does the Belarusian stay focused on hitting those little yellow things on the court?

“There’s really no such thing as unstoppable in tennis, because sooner or later it’s going to happen to everybody,” Azarenka said recently. “I’m here to try to win every match when I go on court. That’s the mentality. And how many wins it will be and all the numbers, that just depends on me doing as good a job as possible every single day, just giving my best – that’s the only thing I can ask of myself.”

Azarenka came out of the blocks in 2012 with a phenomenal 26-0 start, winning Sydney, the Australian Open, Doha and Indian Wells, then making the quarterfinals of Miami before falling to Marion Bartoli.

So far in 2013, Azarenka is 14-0 – she reached the semifinals of Brisbane before having to withdraw due to a toe injury, then won the Australian Open and Doha again. Now she’s back in Indian Wells.