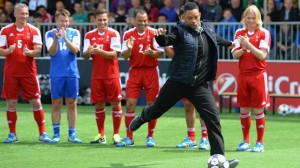 Hollywood star Will Smith follows his compatriot Diana Ross into the annals of football history, with this terrible penalty. The actor was at a celebrity and ex-pros’ match before the Champions League final in London on Saturday.
Willard Christopher “Will” Smith Jr. (born on September 25, 1968) is an American actor, producer, and rapper. He has enjoyed success in television, film and music. In April 2007, Newsweek called him the most powerful actor in Hollywood. Smith has been nominated for four Golden Globe Awards, two Academy Awards, and has won four Grammy Awards.