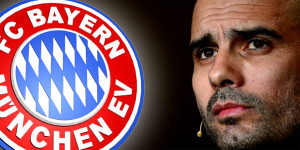 This time, he has arrived. Pep Guardiola took office this morning at Bayern Munich. He succeeds Jupp Heynckes who leaves Bayern Munich after completing a unique treble – German Championship and Cup, Champions League! –

For many, his mission after the extraordinary year that Bayern Munich has just made will be very difficult!

Pep gave his first press conference at Bayern! “Guten tag. Excuse for my German that is still very light, explained Guardiola. But I will do everything to improve it in the coming weeks. It is a chance to be here at Bayern Munich. This Bayern made up of great players and a story. Take me as a coach, it’s a gift.

I have to live with this tripled. There is a real pressure, I know. But this challenge does not have any problem. It is simply the role of a coach. I am going to h andle a team that played a fabulous season with three titles. When you’re a Bayern coach, you always have the pressure and the need to win. I have to adapt and not vice versa. There is no need to change much here, this is my opinion. It is normal to have to wait and I want to keep the club as high as possible. “

In an interview with the German football magazine Kicker, Jupp Heynckes had wished him good luck and said he is in need! “I wish Pep Guardiola the best and much success I had with my team. I would be glad if Bayern still wins the national title and the Champions League. “

Josep Guardiola knows he takes the reins of the German club since 16 January.

Worldwide experts are asking this question: “How will he who has worked with the passing game of Barça succeed with Bayern? And what can he do better than the tripled Heynckes, as he himself had done in 2009 with the Blaugrana? ”

The Kaiser Franz Beckenbauer, the German football legend recognizes it, his mission will not be easy: “he shoul repeat the success of Heynckes, a damn difficult task unless he wins the World Club Championship in December”

Pep will play their first friendly match against Barcelona (July 24) in the German Supercup three days later in Dortmund.

The championship of the Bundesliga starts on August 9 against Mönchengladbach (August 9).

A European Supercup match against Chelsea expects Bayern on 30 August …

But no, Pep has no pressure …