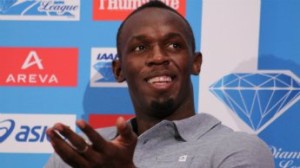 Usain Bolt arrived in Paris on Tuesday for the Meeting Areva. The Jamaican will compete in the 200 m of the Diamond League meeting in Saint-Denis on Saturday. The six-time Olympic champion met the media and he did not escape to topical issues. One month before the start of the World Athletics Championships, the fastest man in the world intends to prove that he is still the fastest man in the world.

“What motivates me is the competition. Motivation is the key. There are young people to push you (like his fellow Warren Weir, Nickel Ashmeade, Keman Bailey-Cole,), but when I see Yohan Blake (and his fellow and dolphin in the London Games, currently injured), Tyson Gay, who returned to great shape after being injured, the challenge is exciting. You will never hear me say more invincible I am before a major championship, but I make sure to get there by being better prepared. “

“After the Beijing Olympics, I wanted to celebrate the success or even to have a good time. Over the years, the body reacts differently. So I became wiser and certainly I pay attention to my body. Confrontations in meetings or in Trials allow you to know where you are, to correct errors for special occasions. I’m pretty happy with what I did on the 100 m in the selections (Jamaican). I was particularly reassured about my second part of the race. We must continue to work. “

“We must have hope for a full year without injury, and it is not easy. This is how we can move forward and hope to beat the record. And generally, at the Olympics and the World Olympics, there is a new track, a particular pressure, a stronger passion. We are asked to be more efficient. This is true, at least in my case. “