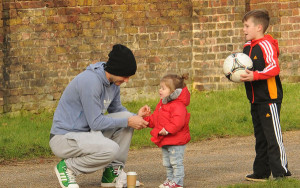 The recently retired David Beckham hung this week, a new distinction to his name. The champion of France won the dads’ race organized by the London school attended by his child Cruz. David did not have much difficulty to beat his opponents. The former PSG player with his athleticism had fun by beating with a smile the other dads.

Cruz can boast to have fantastic parents. His mother Victoria Beckham also threw off her heels to join the party. She finished second behind the fashion designer Stella McCartney during the mothers race.