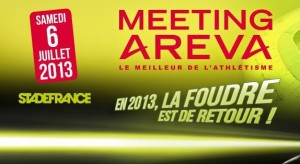 The Burundian athlete who specializes in the 800 m, Francine Nyonsaba ignited the lap at the Meeting Areva. The winner of the Diamond League on the 800 m confirmed her leading position. She imposed 1’57” 26, before the Moroccan Malika Akkaoui, who beat her personal record in 1’57” 64, and the American Alysia Montano (1’57” 75).

Ezekiel Kemboi of Kenya, at his side has broken the record in the 3000 m. The Olympic champion dethroned the time of Paul Koech recorded in 2012.

With 7’59” 03. He holds the world’s best performance of the year according to diamondleague-paris.com.