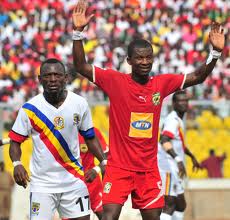 The 2013/2014 Ghana league will feature more experience players this season. The league formed in 1956 has been dominated mainly by kumasi Asante Kotoko and Accra Hearts of Oak. Over some years now,the competition has been very tight as Kotoko and hearts now
find it difficult to even be in the top 5 teams at the end of the season.
Teams like Brekum Chelsea, Aduana Stars, Medeama Sporting Club, Ebusua Dwarfs have brought massive shake up in the league as they always give Kotoko and Hearts a hard nut to crack whenever they meet. Even though Kotoko won last season, it wasnt as easy as the way it used to be.It was their last match that won them the trophy.
This year’s league promise to be more competitive as more senior players return to the league. Players like Dan Quaye, Stephen Oduro, Edmund Owusu Ansah, Amankwa Mireku ,Rahim Ayew, George Owu, have now began negotiation to play for their various clubs.