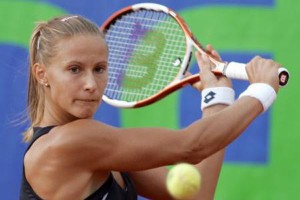 After Venus Williams out from the China Open, the tennis world in Beijing witnessed another output Wednesday afternoon when the Serbian N° 14-ranked tennis player Ana Ivanovic bowed to the Slovenian, Polona Hercog in straight sets, 64 64.

Hercog really enjoyed her win on such a big court and said it was one of the biggest victories in her career.

“It was a big challenge for me to go out there on a big court and play against Ana Ivanovic, and I’m just really happy the way it turned out,” Hercog said. “It’s probably one of the biggest victories for me. I beat Bartoli before when she was Top 10, but Ana is on her way back so it’s a very big win for me.”

The other second round match of the day saw Andrea Petkovic follow up her first round upset overVictoria Azarenka with a 46 64 61 win over two-time China Open winner Svetlana Kuznetsova.