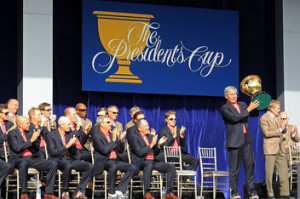 Tiger Woods secured the winning point as the USA beat the Internationals 18.5-15.5 to retain the Presidents Cup.

Leading 14-8 going into Sunday’s singles at Muirfield Village in Ohio, it seemed a formality for Fred Couples’ men and for most of the afternoon the result never seemed in doubt.

Still needing to find an 18th point to secure outright victory, the US were held up further as Adam Scott, Marc Leishman and Charl Schwartzel claimed victories.

But Tiger Woods, in the ninth match down, kept his cool to hold off Richard Sterne and bank the winning point for the third Presidents Cup running.

The day had started with five foursomes matches needing to be completed after persistent bad weather had played havoc with the schedule. 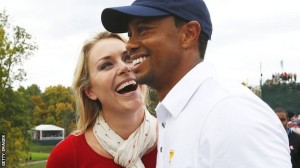 Leading 11.5-6.5 overnight, the US stretched that five-point lead to six to give themselves a big cushion going into the 12 singles.

Bill Haas and Steve Stricker beat Scott and Hideki Matsuyama 4&3 while Webb Simpson and Brandt Snedeker saw off Louis Oosthuizen and Schwartzel 1up.

DeLaet and Day halved with Phil Mickelson and Keegan Bradley while Els and Brendon de Jonge won 1up to end the winning run of Woods and Matt Kuchar, who had taken victory in their first three matches together.