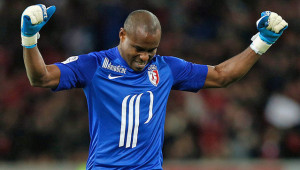 Nigeria international goalkeeper Vincent Enyeama has been named as the French Ligue 1 Player of the Month of October, following his impressive performance for Lille OSC within the period under review.

Challenged by PSG’s Zlatan Ibrahimovic and Edison Cavani for this award, Enyeama won votes ahead of them.

Enyeama has been impressive for Lille this season, since he was installed as the club’s first choice goalkeeper by Rene Girard.

The 31-year-old who has also been shortlisted for the Glo/CAF African footballer of the Year Award has conceded in only two of the 13 games played this season.