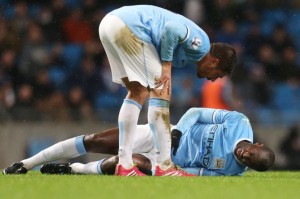 The whole Côte d’Ivoire holds its breath. Injured on Sunday during Liverpool-Manchester City (3-2), midfielder Yaya Toure could miss the rest of the season. They played the 18th minute of play, the Elephant held his knee after a failed strike. Moments later, he stops again and must be replaced. His team lost the match thereafter.

But more worrying is the discourse of his coach after the game. Manuel Pellegrini has released that the former Barcelona could not replay the whole season. “Yaya will miss the next game. But it is also possible that he misses the whole season”, said the Chilean. He did not specify what nevertheless suffered the former Monaco.

It is Sabri Lamouchi who must be sadly worried now. Touré is one of the engines of the Elephants and with the World Cup in 60 days, all this information will be shocking.