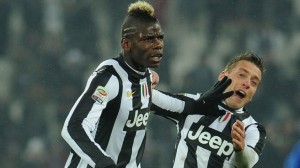 Paul Pogba, we do speak enough! As the giant midfielder of Juventus continues to sharpen the appetite. Arsene Wenger could not help but show rave about the Franco-Guinean.

Arsenal manager has lavished praise on Paul Pogba, the star of Juventus. “Paul Pogba, he is a little the trigger of the team of France. He can become the player of the future for the team of France, said Arsène Wenger, the French manager of Arsenal. “He is a combination of the quality of Patrick Vieira and strength in impact. He can also create and score goals”, said the French technician about the midfielder of the Bianconeri on BeIN Sports.