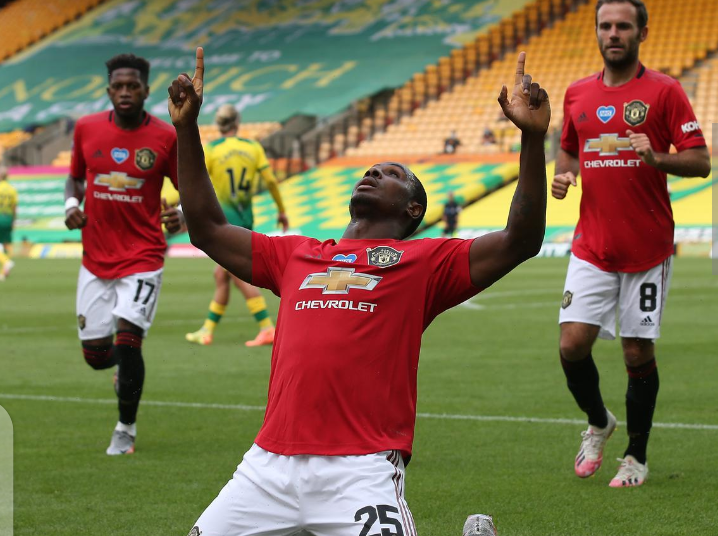 Nigeria forward Odion Ighalo has been lavished with praise by Manchester United manager Ole Gunnar Solksjaer who described him as a goal poacher.

Ighalo scored his fifth goal in four starts for the Red Devils who have booked a semi-final ticket in the Emirates FA Cup following a 2-1 victory against Norwich at Carrow Road.

Solskjaer made eight changes to the side which beat Sheffield United in the Premier League where Igahlo made a cameo appearance for hat trick hero, Anyhony Martial.

However, he was saddled with the responsibility of leading the forward at Carrow Road.

He reposed Solksjaer’s confidence on him as he scored the opening goal for Manchester United.

But it was Harry Maguire who became the hero of the day as his last-gasp goal sealed the victory for Manchester United in the extra -time.

Albeit, Ighalo’s performance was worth talking about by Solksjaer who described him as a goal scorer and poacher.

The manager said that was why the club had to work hard to ensure they keep him till January 2021.

Speaking on Ighalo’s stint for goals and his perfect finishing Solksjaer said;

“He’s got one eye on the ball.

Solksjaer revealed that the on-loan Shanghai Greenland Shenhua is important to his plan this season.

He said, “Very important, that was important for me, we worked hard to do it, and Odion knows how much we value him in and around the dressing room.

“He’s a goalscorer, a poacher, he’s strong and we can play the ball into him. He showed for the second and Paul [Pogba] found him.”

The 31-year-old netted a brace to help the Red Devils defeat Derby County 3-0 in the fifth-round in March.

The former Watford man also has strikes against Club Brugge and LASK in the Europa League to his name, and Solskjaer praised his all-round abilities after the final whistle at Carrow Road.

Despite his performance, the former Super Eagles forward is yet to start a Premier League game for Manchester United.

He took to his Twitter handle to celebrate helping his team reach the semi-final of the Emirates FA Cup.

His goal also caught the attention of the sponsors of the FA Cup, Emirates who tweeted.

“The boy from Lagos scores again for the club of his dreams in the Emirates FA Cup.”