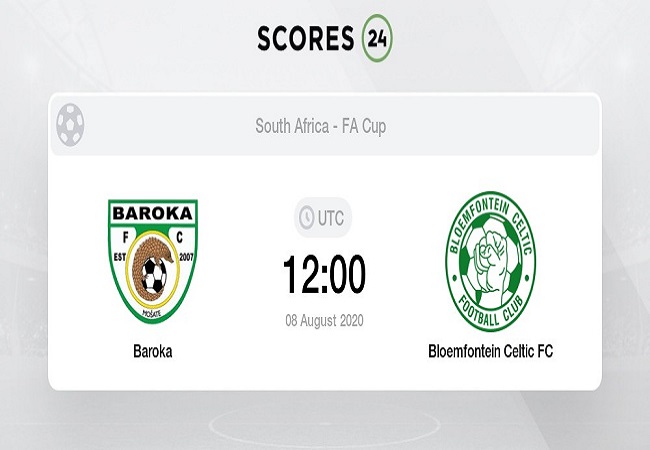 Bloemfontein Celtic and Baroka FC in the challenge for a place in South Africa’s Nedbank Cup (FA Cup) final. This encounter will mark football return in the country, first after the coronavirus-enforced lockdown in March.

The game will kick-off on Saturday 8 August 2020 at 14:00 CAT at the Orlando Stadium in Soweto. The game is playing the first semifinal.

Celtic have earned their spot in the semifinals by defeating AmaZulu (4-1). Maritzburg United (3-2) and TS Sporting (3-2 on penalties after a 1-1 draw). The latter triumph over the National First Division side was their last competitive match, played on March 15.

Baroka, meanwhile, have overcome Polokwane City (1-0), Hungry Lions (4-2 on penalties after a 2-2 draw). And Black Leopards (1-0) to reach the final four. Their victory over Lidoda Duvha in the quarterfinals was also their last competitive outing, played on March 14.

In head-to-head terms, this will be the very first meeting of Baroka and Celtic in a cup clash. The teams have been regular combatants in the top-flight league since 2016/17. With Phunya Sele Sele claiming three wins compared to just one for Bakgaga.

The winner of this match will face either Mamelodi Sundowns or Bidvest Wits in the final.