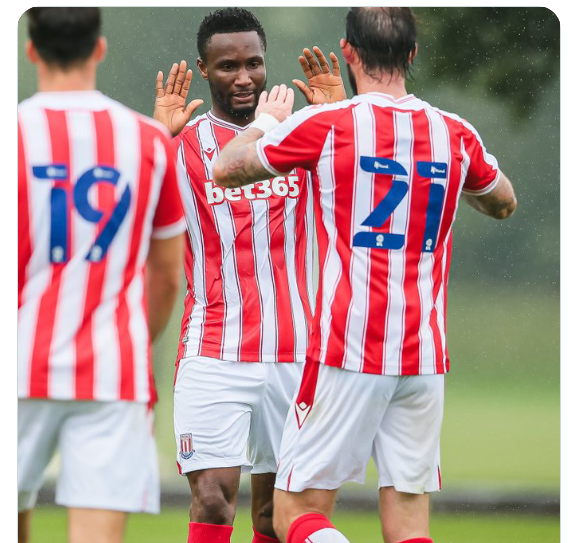 Mike joined Stoke City as a free agent after he terminated his contract with Turkish side Trabzonspor.

The former Chelsea midfielder who wore No. 12 while playing for the Blues, will wear the No.13 jersey according to a statement on the club website.

“Stoke City’s summer signings have been allocated their squad numbers for the 2020/21 campaign.

“The Potters have brought in Morgan Fox, James Chester, Steven Fletcher and John Obi Mikel on permanent deals so far in the summer window.

“Fox and Fletcher, both arrivals from Sheffield Wednesday, have been allocated number 3 and 21 respectively.

“Chester retains the number 12 he donned during the second half of last season during his loan spell from Aston Villa.

“Meanwhile Mikel will wear the number 13 for the new season after joining the Potters 11 days ago.”

Mikel who scored against Shrewsbury in a friendly match is part of the Potters squad ahead of their Carabao Cup game against Blackpool on Saturday.

Mikel will be hoping to bring his experience to play for Stoke City having promised to help them regain promotion back to the Premier League.

The former Tianjin Teda midfielder won the Carabao Cup with Chelsea in the 2006-2007 season.