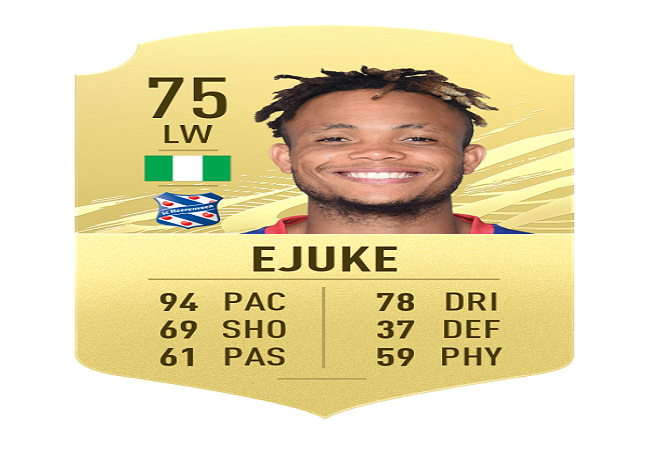 Ahead of FIFA 21 officially to release early October, EA Sports has confirmed the top 20 fastest players with the highest pace attributes. And a Nigerian player cracked the list.

The Super Eagles hopeful has an overall rating of 75 and his next valuable attribute is dribbling at 78. The left winger has 69 shooting, 61 passing, 59 physicality and 37 defence.

Wolverhampton Wanderers winger Adama Traoré leads the way with PSG’s Kylian Mbappé and Bayern Munich’s Alphonso Davies as the players with most pace in FIFA 21.

Two Nigerian players in the shape of Wycombe Wanderers’ Adebayo Akinfenwa and Orlando City’s Daryl Dike appear in the top 20 strongest players in the world.

The ‘Beast’, Akinfenwa is the top-rated player when it comes to strength at 97. Dike (96), Aleksander Vukotić (Waasland-Beveren, 95), Romelu Lukaku (Inter, 95) and Armando Méndez (Nacional de Montevideo, 95) follow him.

Bayo’s overall rating is 65 while the younger brother of Super Eagles striker Bright Dike is rated a 61.