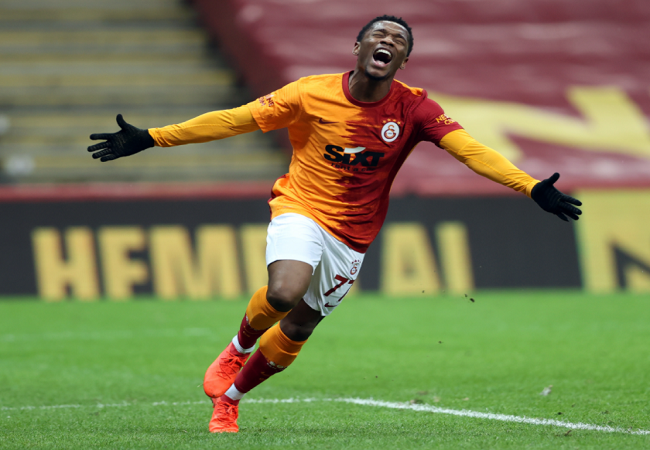 Galatasaray thrashed Denizlispor in a Super Lig clash on Wednesday evening at Türk Telekom Stadium. And Nigerian winger Jesse Sekidika helped in demolishing their opponents at 6-1. The winger has taken fifteen games in all competitions to open his goalscoring account for Turkish giants.

Sekidika and two other Nigerian players in the form of Oghenekaro Etebo and Valentine Ozornwafor were named in the Galatasaray matchday squad. But they all started on the bench.

The Lions were leading 3-0 at half-time thanks to goals from Emre Akbaba, Sofiane Feghouli and Ryan Donk.

Veton Tusha pulled a goal back for the visitors two minutes into the second half, a Muhammet özkal own goal made it 4-1 before strikes from Younès Belhanda and Sekidika.

On as a substitute in the 84th minute, the Galatasaray number 77 scored arguably the best goal of the game, blasting an unstoppable shot past goalkeeper Costel Pantilimon from a tight angle in stoppage time after he was put through on goal by Ryan Babel.

In doing so, Sekidika became the player to record Galatasaray’s 500th goal in official matches at the Türk Telekom Stadium.

He spent 374 minutes on the pitch before netting his first official goal for the 22-time Turkish champions. As he played 11 games in the league and four in the Cup.

After 19 matches in the division, Galatasaray are third in the table with 36 points. They are behind Istanbul rivals Besiktas and Fenerbahce who have 38 points each.