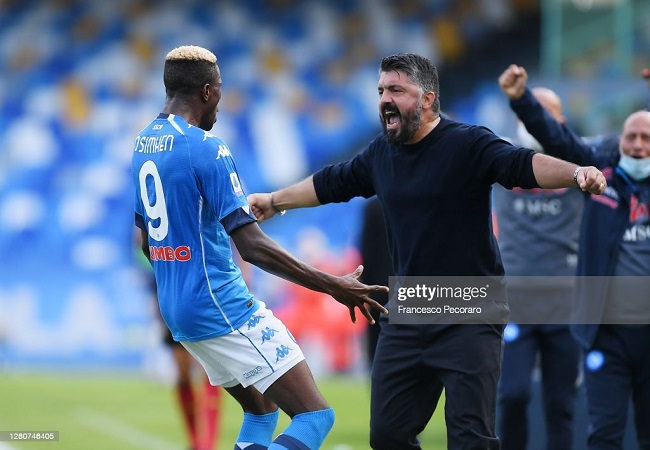 Napoli coach Gennaro Gattuso declared that it is not club medics but rather the Italian Federation to decide when Victor Osimhen will return to action.

The Nigeria national teamer was unavailable for selection. As the Serie A side were knocked out of the Europa League in the round of 32 stage despite a 2-1 win against Granada at the Stadio Diego Armando Maradona on Thursday evening.

Osimhen has to rest for a period of few days before resuming training. This following the head injury he suffered against Atalanta last weekend. And the striker is now rated as doubtful for Napoli’s Serie A match against Benevento this coming Sunday.

Piotr Zielinski fired Napoli ahead in the third minute. But the goal was cancelled out by Angel Montoro in the 25th minute. Leaving the Blues with a mountain to climb to progress to the last 16. As they needed to score three more goals without reply.

There was no twist in the tail despite Fabian Ruiz finding the net just before the hour mark.

“With Benevento? It’s not up to us. He’s had a head injury. He’s blacked out. And it’s up to Federation protocol on things like that. Not our doctor.

“I don’t know if he will be available on Sunday“. Declared Gattuso about Osimhen speaking to Sky Sport Italia after the game.

With Napoli knocked out of the Europa League and Coppa Italia, Osimhen has a slim chance of winning a trophy in his first season in Ital. As The Parthenopeans trail table-toppers Inter Milan by 13 points in the Serie A with sixteen matches left to play.