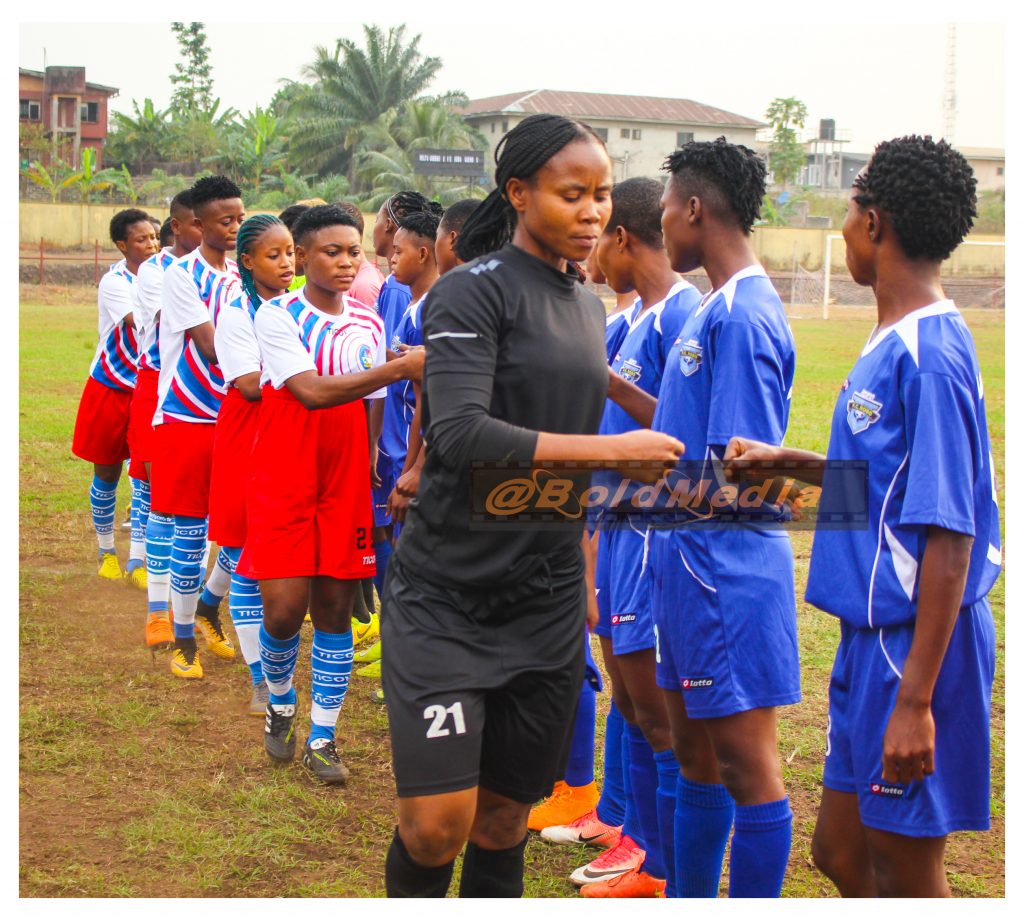 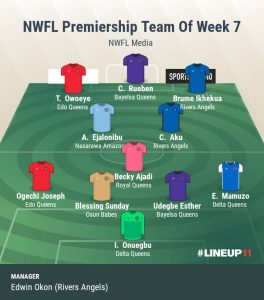 Delta Queens duo, Onuegbu Ihuoma and Edafe Omamuzo has been included in the Nigeria Women Football League(NWFL) Premiership team of the week 7.
Both players were impressive for the Okowa Girls who defeated FC Robo at the Agbor Township Stadium last week.
The NWFL Premiership team of the week 7 was released on Tuesday ahead of the week 8 ties slated for Wednesday.
Rivers Angels head coach Edwin Okon was selected as the manager of the team.
Ihuoma has kept three consecutive clean sheets so far for Delta Queens in their last three games.
She will be hoping extend her clean sheet when they host Edo Queens on Wednesday.
Here are the NWFL week 7 team of the week.

Blessing Sunday held sway for the Omoluabi Queens holding play from the centre in their 1-0 win against Sunshine Queens.

Her set-piece prowess and hold-up play were crucial in Osun Babes’ triumph over the Betty Babes. She was at the end of many tackles from Sunshine Queens’ players due to her style of play which propelled her side to another home win.

Ajadi was a strong pillar at the backline of the Canadian Geese as they secured their biggest win of the season against DreamStar FC Ladies.
She marshalled the backline ensuring that the likes of Anuoluwapo Salisu couldn’t post much threat to the defence.

Udegbe again put up a superb defensive display for the Umuahia-based side.

Joseph also held sway for Edo Queens against Confluence Queens who were without Coach Whyte Ogbonda after his resignation.

She ensured that the New Direction Ladies didn’t pose much threat to Sandra Chi-chi in goal for Edo Queens.

Ikehua scored her third goal of the season as Rivers Angels defeated Pelican Stars 1-2 in Calabar. Her goal from the midfield was crucial as Pelican Stars tried to force a comeback which couldn’t materialise at the end of the day.

After a slow start to the season, Temilope Owoeye opened her goal account for Edo Queens last week.
The joker and regular super substitute came off the bench to score the all-important goal for the Obaseki Ladies to ensure that they picked the maximum three points against Confluence Queens.

The experienced defender has shown class this season as she scored a beautiful goal for Rivers Angels last week, with the game ending in a 2-1 victory in favour of her team.

Ejalonibu Adejoke also scored her second consecutive goal for Nasarawa Amazons as they got their first away win of the season in Uyo.
Her goals are always crucial in helping Nasarawa Amazons to victories as evident against Abia Angels and Ibom Angels.

The former top goal scorer in the league is finding her scoring boots for the Moses Aduku tutored side as they occupied the top position on the league table ahead of Rivers Angels.