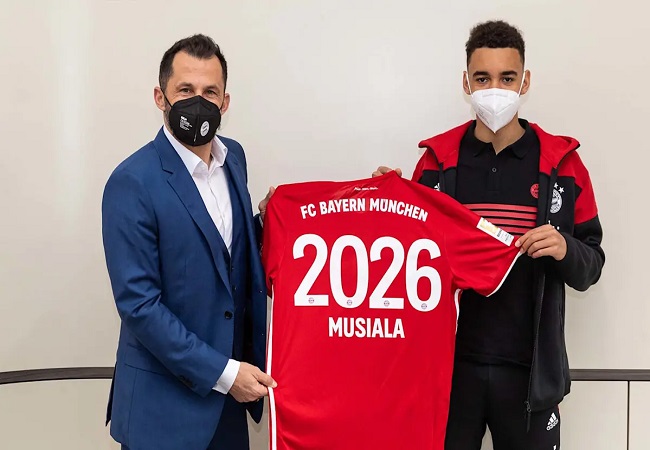 Bayern Munich have confirmed that German-Anglo-Nigerian attacking midfielder Jamal Musiala has signed his first professional contract with the club. The European champions announced the information with a statement on their official website.

Musiala was on the books of Chelsea for eight years. But He switched to Bayern in 2019. And he is now tied to the Bundesliga powerhouse until at least 2026.

The 18-year-old has made rapid progress since joining the Bavarians. He was invited to the first team by manager Hansi Flick at the start of the season. And he hasn’t disappointed, scoring 4 goals in 26 games.

Born in Stuttgart, he recently committed his international future to his country of birth. And he would no longer be eligible to represent England and Nigeria if he is involved in all the three matches to be played by Germany later this month.

“I’m really pleased to have signed my first professional contract at FC Bayern. I just feel very good at the club and in the team. I’m playing with the best players in the world. And I can learn from them every day in training.” Musiala declared upon signing the contract.

“Hansi Flick, Hasan Salihamidzic and Marco Neppe along with the whole club have believed in me and given me the chance very early on.

“I just want to repay that faith with good performances, keep getting better and win a lot more titles with FC Bayern. My aim is to become an important player for this club.”

Musiala is listed as the youngest player to score for Bayern Munich in the Champions League. And he is the youngest-ever player to debut for the club in the Bundesliga after making his senior bow against SC Freiburg last June.