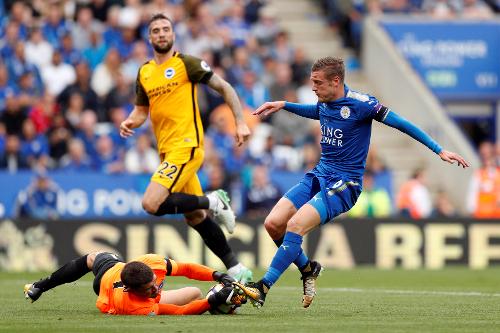 Brighton will take on Leicester on Saturday (8pm) for the matchday 27 of the Premier League.

Leicester City are going through a complicated period. In addition to being knocked out of the Europa League, the Foxes have taken just one point out of their last two matches in the Premier League.

After being lossless in their last four League games, Jamie Vardy and teammates carried out a bad operation last weekend by losing at home against Arsenal (1-3). They did not react this week with a disappointing 1-1 draw against 15th based-side Burnley.

They are still well established in third place in the standings, but must quickly recover so as not to miss the qualification in the Champions League which is their main target. Brendan Rodgers’ team will have the means to revive themselves in their next meeting and a trip to Brighton lawn.

Brighton are currently 16th in the Premier League and are just 3 points ahead of the relegation zone. During the last 2 matches, the Seagulls lost against Crystal Palace (1-2) and on the lawn of the relegation outfit West Bromwich last weekend (1-0). These 2 setbacks follow a very positive dynamic of 6 unbeaten games (3 wins and 3 draws) which allowed the team to give itself some air in the standings. I think Brighton will play bravely here, have the initiative and at least deserve it, but win as much as possible.

I looked at the odds and, to put it mildly, I was surprised by them – the team that comes in fifth from the end is the game favorite with the team that comes in third … which, in general, once again confirms the position in which Leicester found themselves – we bet on “Brighton with a handicap (0) for 1.88 in 1xBet.