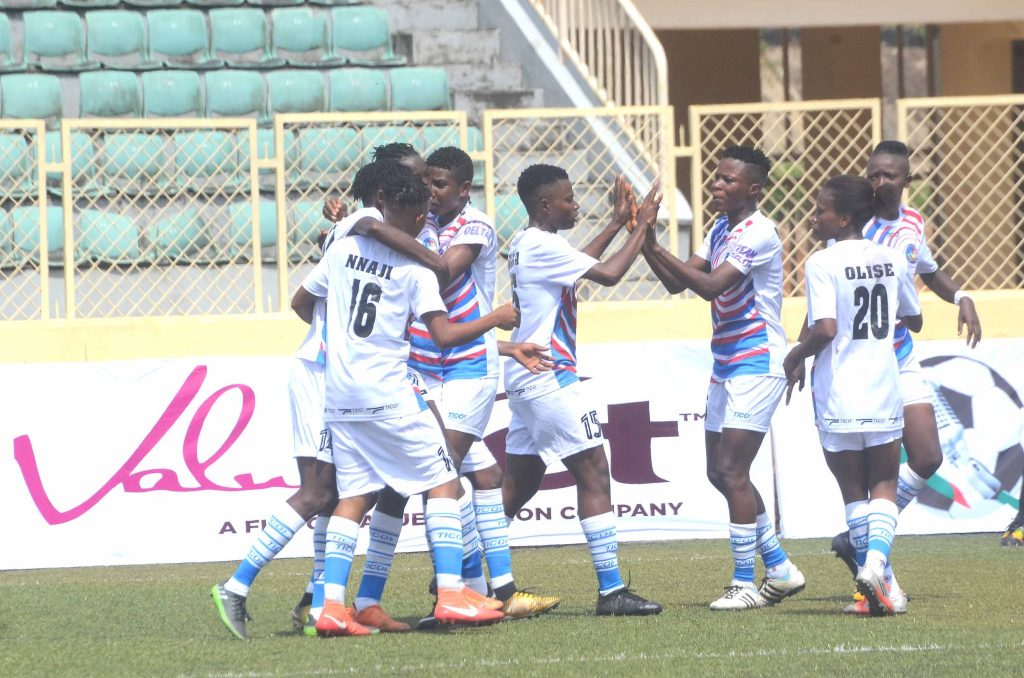 After romping to a 2-1 win over Edo Queens in the opening game of the NWFL Super Six, Delta Queens was able to curtail Rivers Angels.
Coach David Ochei made three changes to the squad that defeated Edo Queens 2-1 on Monday bringing in Tejiri Edward, Bright Nnaji and Chioma Olise.
It was an end to end encounter for both teams who have earlier met back in December at the University of Port Harcourt Sports Complex.
Edwin Okon Ladies were hoping to get their first win in the Super Six having drew the opening game.

Read Also: NWFL Super Six: Delta Queens Off To A Flyer With Win Over Edo Queens

Alice Ogebe rounded up Delta Queens goalkeeper, Onuegbu just to tuck the ball inside, but was denied by  Delta Queens defense who recovered in time.
Again, in the 7th minute, another chance came begging for River Angels as Christopher Precious failed to make good use of Vivian Ikechuchwu’s cross from the right flank.
The pressure was so much on Delta Queens who were defending excellently well
Delta Queens got their best chance on target in the 10th minute when Chiamaka Okuchukwu rallied round the ball in a mesmerizing way.
But her effort was thwarted by Ugo Njoku who dispossessed her.
Chiamaka who scored in her debut on Monday almost gave Delta Queens the lead as she beat her marker, but her low targeted shot went wide.
In the 28th minute,  Comfort Folorunsho missed another chance with the wood work coming to Rivers Angels rescue and Chiamaka’s rebound went wide.
Ochei quickly pulled out Bright Nnaji who seems not to be in the party with  Rosemary Adeshina taking her place.
Both teams having failed to break the deadlock went into the first half break with rhe scoreline 0-0.
Rivers made a lively start to the second half, pressing high as they pushed for an early goal.
Okon brought in two former Delta Queens players, Maryann Ezeanagu and Ikekhua Oghenebrume.
Ezeanagu ignited more attacking force for Rivers and in the 67th minute, she connected well with Imaran who was on the run, but Edafe was just at the right place to keep safe.
Ezeanagu kept marauding and in the 73rd minute, she got her side a free kick.
The resultant free kick played by Amarachi Okoronkwo lead to  a penalty for Rivers Angels.
Ogebe stepped forward and take the spot kick but Delta Queens goalkeeper Ihuoma Onuegbu guessed right to keep the scoreline remain goalless.
Five minutes  After saving Alice Ogebe’s penalty kick, Iheoma Onuegbu made another great save to deny Amarachi Okoronkwo’ and Rivers Angels.
The only thing that lacked in the end to end encounter was goal as both teams did well to deny each other from scoring.
With the result, Delta Queens are joint table topper with four points from two games alongside Sunshine Stars and FC Robo.