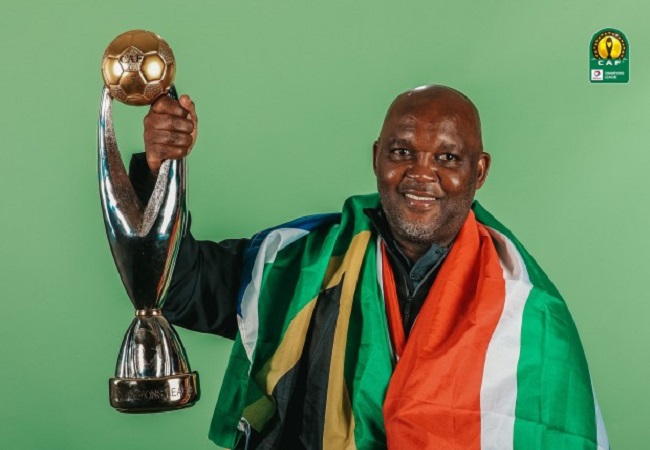 Al Ahly lifted the CAF Champions League trophy over the loosers Kaizer Chiefs on Saturday. Leading the Egyptian giants to their 10th victory, the legendary coach Pitso Mosimane has become the second-most successful coach in the competition.

His first Champions League title came while he was coaching Mamelodi Sundowns in 2016. He then after clinched two other thophies with Al Ahly last year and recently.

Mosimane is no stranger to creating a bit of history by winning titles as he has become familiar with it during his time with Sundowns.

His 13 domestic trophies with SuperSport United and Sundowns make for an impressive CV. He’s the only coach to have won the title five times. And he is tied with Gavin Hunt to win it three times in succession.

Since he went to Egypt in September last year, Jingles guided Ahly to the Egyptian Premier League, the Egypt Cup, two Champions League titles, and the Super Cup. Admittedly, he found the league title in the land of the Pharaohs all wrapped up. But he was still handed a medal.

He also went to the global stage with the Red Devils at the Club World Cup in Doha, securing a third-place finish which came with a bronze medal, a first for Al Ahly.

Mosimane, meanwhile, thanked Alhy boss Mahmoud El Khatib for entrusting him with the job. “I want to dedicate the trophy to‚ of course‚ ‘Captain Bibo’ [Khatib]. Because Mr Khatib gave trust to me.

“He could have gone to Europe and brought all these Europeans who are always coming to Africa to coach. But Africans‚ we can win it ourselves.” – Additional reporting by Marc Strydom