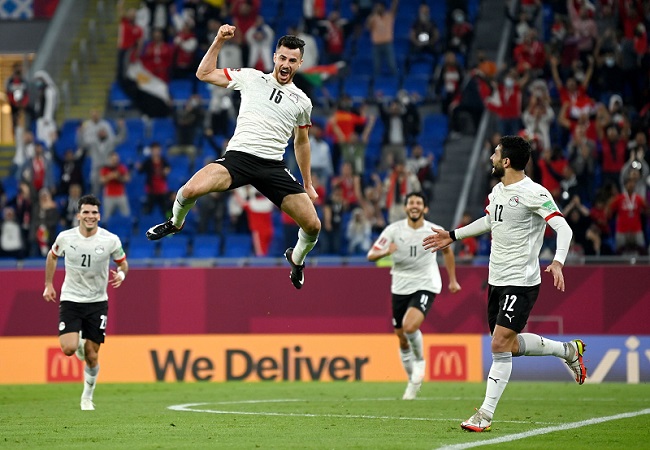 Egypt turned on style to rout nine-man Sudan 5-0 in a one-sided FIFA Arab Cup affair to reach the quarter-final with one match to spare in Group D on Saturday.

The Pharaohs moved level on six points with North African rivals Algeria, with both sides meeting in the final group game on Tuesday to determine who will advance as leaders.

Lebanon and Sudan waved goodbye to the tournament in Qatar after failing to bag any points.

Egypt coach Carlos Queiroz once again experimented with his line-up, fielding some new faces and deploying other established players in unfamiliar positions, such as Ahly’s natural defender Ayman Ashraf who played in the heart of midfield.

The seven-time African champions were a much improved side from the one that needed a second-half penalty to beat Lebanon 1-0 in their group stage opener, toying with Sudan and scoring some superb goals, including a sublime opener from Ahmed Refaat.

On only his third international appearance, the left winger, who plays for Egyptian Premier League club Future FC, needed four minutes to put Egypt ahead in stunning fashion.

His original free-kick struck the upright and was poorly cleared by a defender as he took full advantage to unleash a left-foot volley that nestled into the top corner of the net from the edge of the area.

Zamalek winger Ahmed Zizo doubled Egypt’s lead on 13 minutes, firing home a powerful penalty after right-back Omar Kamal was hauled back by his challenger in the area.

Zizo’s club teammate Mahmoud El-Wensh, a natural defender, made it 3-0 in the 31st minute after some brilliant footwork from debutant Hussein Faisal, a 22-year-old winger who joined Smouha in the close season after Zamalek offloaded him.

Faisal dribbled past a couple of challengers near the byline before pulling the ball back for El-Wensh to score with a bouncing first-time effort.

Sudan went down to ten men on the stroke of halftime when Yasir Mozamil was sent off for a reckless studs-up challenge on Ayman Ashraf.

They received another blow early in the second half when Faris Abdallah was also dismissed for a second bookable offence, giving Egypt a golden chance to increase their tally.

Egypt duly delivered, with Hussein Faisal opening his international account with a simple tap-in after Sudan keeper Ali Aboeshren poorly parried a header from Marwan Hamdi in the 57th minute.

Substitute Mohamed Sherif completed the rout on 78 minutes, making the most of an ill-timed charge out from Aboeshren to head home a floated ball from Magdi Afsha. The goal was awarded following a VAR review after it was initially chalked off for offside.