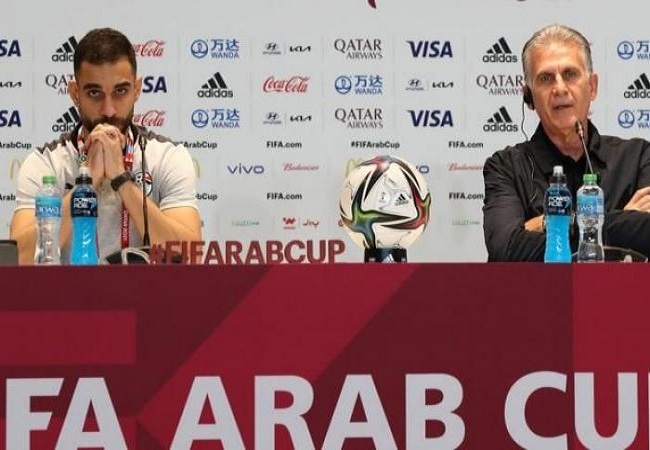 2021 FIFA Arab Cup Resumes this Wednesday with the first two Semi-final encounters. North African rivals Tunisia and Egypt will be in clash in the first game kicking off at 15:00 GMT at the Stadium 974 (Ras Abu Aboud Stadium) in Doha.

The Pharaohs fell behind to an early opener. But they equalized in the dying moments of the opening stanza before Ahmed Refaat and Marwan Dawoud came off the bench to score in extra-time.

The last meeting of these North African rivals saw Egypt claim a 3-1 win in November 2018 in an African Cup of Nations qualifier.

“Tunisia team has a great history. And the current squad is an excellent one… I think the game will be difficult for both teams.” Egypt’s Portuguese coach Carlos Queiroz told the pre-match news conference.

“Both teams are excellent. And this will make this game an exciting one.”

The quartet have been complaining of different knocks in the tournament. But they have resumed full training ahead of the Tunisia clash, although Queiroz insisted he would not take any risks over their fitness.

“I won’t pressure any of the injured players to play against Tunisia. We will only depend on the fully recovered ones.” He added.

Under the guidance of Queiroz, Egypt recently secured a place in the final qualifying round of the 2022 World Cup qualifiers, which will be played next March in a two-legged form against another group leader.

In late November, Queiroz said that he considers the Arab Cup a good test run for his team for both the 2022 World Cup qualifiers and the 2022 African Cup of Nations that is scheduled to be held in Cameroon between 9 January and 6 February.

Also Read : SHOCKING : AFCON 2021 ON THE VERGE OF BEING CANCELLED

In their 35 previous games, Tunisia narrowly edged the Pharaohs (14 wins to 13).