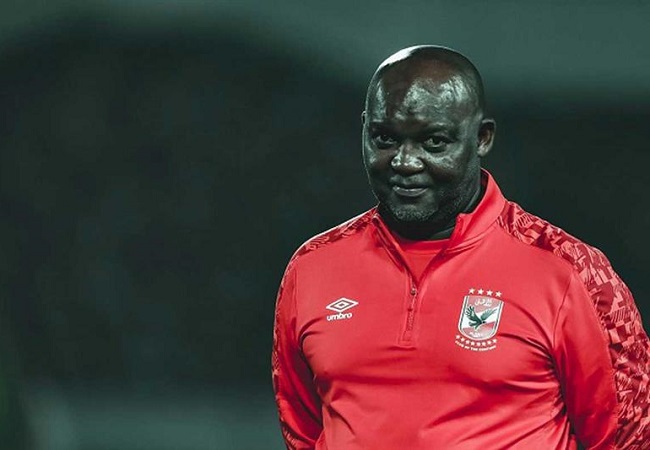 2021/22 CAF Champions League draw released on Tuesday put Ahly in Group A along with Sudan’s El-Hilal and Al-Merrikh and South Africa’s Mamelodi Sundowns, the latter that Mosimane coached before Ahly.

“When you are the Ahly coach, you will always be under pressure to win the continental title. I won two times. So why I can’t win the third title? The mission is not easy. But the team can win the third title in a row.” Mosimane said during the draw ceremony.

The South African coach brought Ahly two precious Champions League titles. The first was in his first season after defeating rivals Zamlek in the 2019-2020 final. And his second title was the tenth for Ahly.

“Ahly are playing in a tough group. And I think one of the Sudanese teams will eliminate the other. Let’s face Sundowns again, they’re looking forward to defeating us. But we can beat them again.” He added.

In the last two editions of the African Champions Leagues, which were clinched by Ahly, they faced Sundowns in the quarterfinals.

Mosimane also expects that rivals Zamalek can qualify from the group stage, where the Whites are playing in Group D alongside Morocco’s Wydad Athletic, Angola’s Petro Atletico and Sagrada Esperanca.

“Zamalek have a good chance of reaching the next stage. I expect that Ahly, Zamalek, Sundowns, Esperance, Sportive Etoile, Wydad, and Raja, will qualify to the quarter finals, as these teams always make it to the round of eight. And I think my predictions will be 80 percent right.” Mosimane concluded.