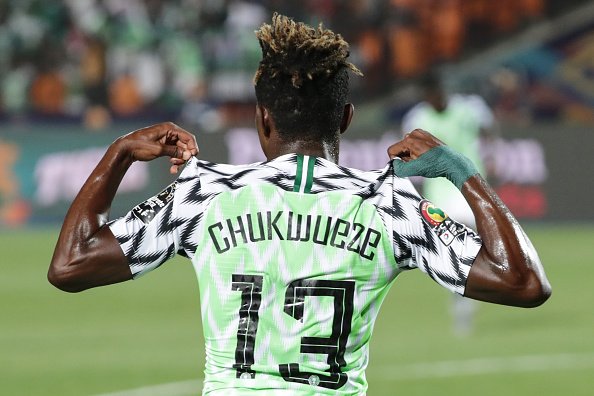 Super Eagles defeated Cameroon club side Coton Sport 2-0 in a friendly game at the Garoua Stadium on Friday in preparation for the African Cup of Nations.

The game which was arranged by the Nigeria Football Federation NFF to fine tune the player ahead of their Group D opener against Egypt saw Ahmed Musa and Samuel Chukwueze scored both goals.

Chukwueze earned the Super Eagles a 2-0 win against Cameroon club side Coton Sport in a practice game in Garoua on Friday.

The game was arranged as part of preparation for the Eagles ahead of their 2021 AFCON Group D opener against Egypt on Tuesday.

It was Austine Eguavoen first game since he was appointed as the Interim coach as the former Super Eagles gave a glimpse of what should be expected from him and his technical crew.

Eguavoen named Maduka Okoye to man the goal post while Kenneth Omeruo and William Troost-Ekong paired in the defence.

Zaidu Sanusi and Ola Aina operated from the wing backs.

Wilfred Ndidi, Joe Aribo and Chidera Ejuke were named in the park as Kelechi Iheanacho led the attack with Ahmed Musa and Taiwo Awoniyi supporting the Leicester City forward in a 4-3-3 formation.

Musa scored the opening goal in the first half as it ended 1-0 before he came off for Alex Iwobi.

In the second half, Eguavoen made changes to the players that started the first half.

Iwobi and Sanusi were the only players from the first half who retained their places.

However, Iwobi later made way for Henry Onyekuru and Umar was replaced by Peter Olayinka.

The Super Eagles will have another sparring game this time between a first and second eleven of the team.