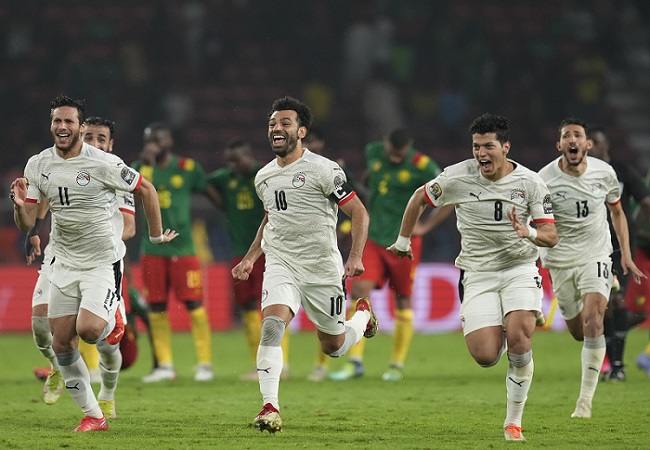 Cameroon’s hope of winning their sixth continental title on home soil has been ended as Egypt defeated the hosts in penalty shootout in the ongoing Africa Cup of Nations (AFCON) second semi-final game this Thursday night at the Olembe Stadium.

Also Read : EGYPT VS CAMEROON : CONFIRMED STARTING XI FOR A PLACE IN THE FINAL

The AFCON final will be a clash between Liverpool stars Mohamed Salah and Sadio Mane. The Pharaohs of Egypt will face the Terenga Lions of Senegal for the coveted trophy on Sunday in a match that will see two of the Premier League’s best wingers go head-to-head for continental glory.

Meanwhile, Cameroon will face Burkina Faso in the third/fourth-place play-off, which has been brought forward a day to Saturday (19:00 GMT).

Salah struggled to get into the game throughout the first half as Cameroon stamped their authority on the contest from the first whistle.

The hosts started well and began to ask questions of Egypt’s defence in the early stages of the match, with the Indomitable Lions feeding off the raucous atmosphere created by the partisan home crowd.

They went close after just 17 minutes when Vincent Aboubakar struck the woodwork with a headed effort from close range.

Michael Ngadeu and Toko Ekambi missed further chances to hand their side an early lead just moments later, with Cameroon unable to break the deadlock before the interval.

Egypt were forced into mounting their attacks on the break in order to stand any chance of shifting the momentum in their favour as the second half progressed.

However, they often found themselves unable to stay on the ball for long enough, leaving Salah isolated in his role as the team’s main attacking outlet.

The Liverpool ace registered his first shot on target shortly before the hour mark but was unable to cause any problems for Andre Onana between the sticks with a trickled effort from the edge of the area.

By the way, Egypt hot-headed manager Carlos Queiroz was sent off in the closing stages of normal time after furiously claiming to the referee that one of his players was punched.

The veteran manager was initially shown a yellow card on 87 minutes, having complained to the linesman. And Queiroz was banished away from the pitch after picking up another caution just a matter of minutes later.