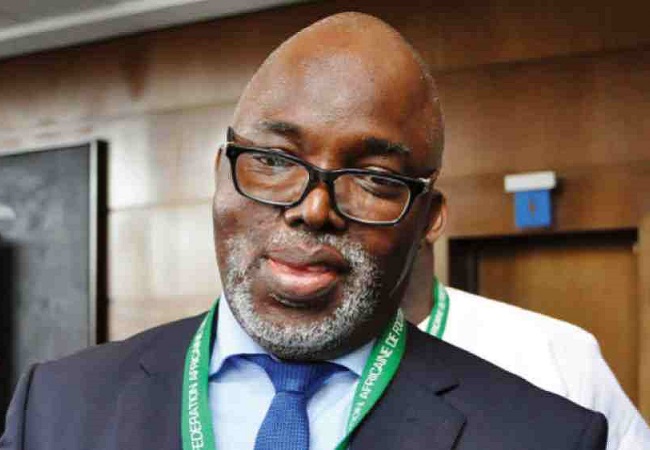 The Super Eagles of Nigeria will meet their West African rivals the Black Stars of Ghana in a two-legged World Cup playoffs next month. The West African derby will see one of them join four other African teams as the continent’s representatives in 2022 World Cup later this year in Qatar. And for the Nigeria Football Federation (NFF) president Amaju Pinnick, the World Cup qualification is a must for Nigeria.

Pinnick knows the implication of missing out on the biggest sporting event in the world. And he pointed out the importance for the three-time African champions to qualify for the showpiece in November. The NFF president reiterated this in a series of tweets after meeting some Super Eagles players, including Ademola Lookman and Emmanuel Dennis.

The meeting held on zoom with the attendance of the Minister of Youth and Sports Development Sunday Dare, also served as a clear the air talk after Nigeria’s disappointing second-round exit in the 2021 Africa Cup of Nations.

“In furtherance to my tweets regarding our plans to ensure we qualify for this year’s @FIFAWorldCup in Qatar, we’ve held a series of meetings in London with our Super Eagles players. It was me, the team secretary, the coach & technical adviser of the team.” Pinnick’s statement read.

“The Ministry of Youth & Sports Development, led by the Honourable Minister, @SundayDareSD also had a zoom meeting with over 30 players of the Super Eagles squad. Aside the chance to introduce the new members of the coaching crew to the team, it was also a chance to have “clear the air” talks.

“And I’m so proud of the commitment and zeal I’m seeing and getting from the team. From players like Etebo, Kelechi, Troost & new lad, Lookman, the message was & is clear; we will play at the World Cup and give a good account of ourselves.

“We are not going to Qatar to make up the numbers. We are going to give it our best shot. I’d like to, again, thank the Honourable Minister, @SundayDareSD. It might sound like a broken record at this point, but his support is truly massive.

“From ensuring we get the MKO Abiola Stadium in Abuja, to joining in the zoom call with over 30 members of the National Team, his energy is truly infectious.

“Again. Make no mistake. World Cup qualification is non-negotiable. We are putting all of our efforts on getting the ticket.

“Your prayers and support are invaluable in this regard. God willing, we will achieve our goals because we will not relent. God bless Nigeria & God bless us all. Goodnight.” Ended NFF President.

The Super Eagles will take on the Black Stars in Accra on March 23 in the first leg before hosting their West African rivals for the second leg at the MKO Abiola Stadium four days later.