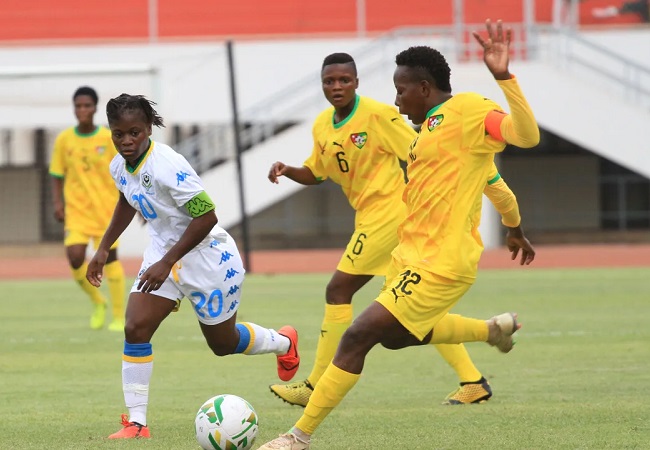 Togo beat Gabon 2-1 in return leg match in Libreville on Wednesday to secure a first ever qualification to the TotalEnergies Women’s Africa Cup of Nations, Morocco 2022.

Both teams went into the crucial second leg showdown at Stade Augustin Monedan de Sibang, with the Togolese holding a 2-1 first leg win at home over the Gabonese at Stade de Kegue in Lome last Thursday.

Gabon made a promising start to the contest when they were awarded a penalty. But Vanessa Mazaly was denied from the spot by goalkeeper Ame Lila Amouklou in the 25th minute.

Togo, however, regained ball possession and gained a shock lead through Koudjoukalo Sama five minutes later to head into the tunnel with a hand on the driving seat at the break.

After the restart, the home side came back stronger and eventually found the back of the net when substitute Jessy Ornella Mezui Obiang struck in the 63rd minute.

In the last 15 minutes, the Gabonese were desperate search of a late goal to keep their hopes alive but substitute Takiyatou Yaya netted ruined their quest as she netted the winner nine minutes from time to guarantee a win for the visitors.

With a 4-2 win on aggregate, the female Sparrowhawks have completed the double over Gabon. They thus achieved their maiden WAFCON qualification on their very first attempt.