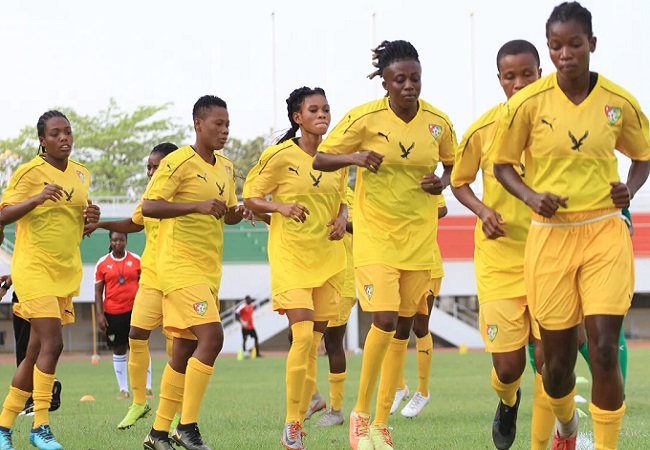 Togo National Women’s team, the Sparrowhawks Ladies will take part into Women’s AFCON finals for their time. And in order to guarantee a successful tournament, the Togo Football Association (FTF) starts the preparations.

Since their qualification last February, the Sparrowhawks ladies will meet again during a camp scheduled from April 15 to 24, 2022. A ten-day course that will only involve local players. Those playing outside the country have not yet been called-up.

The camp will be an occasion for Togo team to prepare for the upcoming competition, the TotalEnergies Women’s Africa Cup of Nations, Morocco 2022.

To qualify, the Sparrowhawks ladies defeated Sao Tome and Principe in the first qualifying round (5-0, forfeit). They then after beat Gabon (2-1 in both legs). Under the leadership of Head Coach Kaï Tomety, a former player who had been running behind this qualification for years, the time has come for Togo.

Also Read : TOGO SECURED THEIR FIRST EVER TICKET FOR WAFCON AFTER BEATING GABON

And to rise to the next challenge, coach Tomety has benefited from the expertise of the staff of the men’s national teams. Local coach Jonas Komla and part of his staff were at her side during the two games against Gabon. Then she accompanied the Sparrowhawks ladies to Antalya in Turkey during their friendly camp last March.

“A very nice experience with Paulo Duarte and his staff. I learned new methods of training and managing players. Things will change at the level of the organization, the chronology of exercises to be scheduled at the level of the Sparrowhawks ladies.” She said at the end of the tour.

Methods that she intends to put to the credit of her players for a good representation in Morocco. “They say you don’t train a girl, you train a boy. For me it’s a non-issue. Football theory is the same. Only men are more aggressive and physical. At the level of women, we like less contact.” Added Kaï Tomety who still hopes to find some rare pearls to strengthen her workforce.

Togo will be one of the debutants of the TotalEnergies Women’s Africa Cup of Nations, Morocco 2022 alongside Botswana, Burkina Faso and Burundi. But no question of making up the numbers.

The Squad for the camp as following