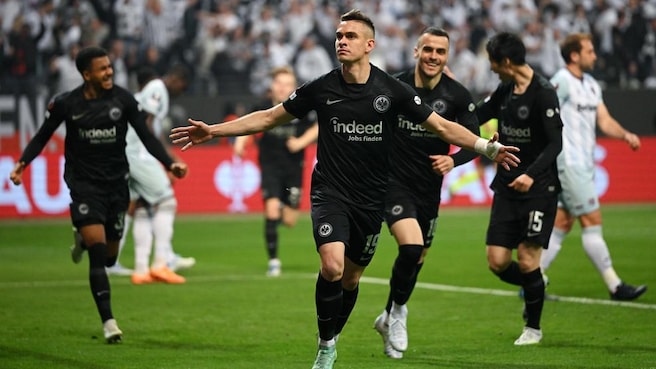 Rafael Borré scored the only goal of the game as Eintracht Frankfurt advanced to their first European final since 1980 with a 1-0 victory over West Ham, who played more than 70 minutes with ten men after Aaron Cresswell was sent off in the first half.

Frankfurt took an early blow when Martin Hinteregger was forced off with an injury, but they had a man advantage within 20 minutes when Aaron Cresswell was sent off for dragging down Jens Petter Hauge, an initial yellow card overturned after a VAR review.

Read Also:UEFA Europa League: To Be In A Semi-Final Is Huge For Us-Moyes

Ansgar Knauff found the unmarked Borré in the penalty area and slotted home from eight metres as the home side quickly capitalised on their advantage.

Before the break, Evan N’Dicka had to clear a Michail Antonio effort off the line, and clear chances remained scarce in the second half, with neither keeper forced into a notable save.

Hammers manager David Moyes was sent off late in the game, and his side’s hopes of reaching their first European final since 1976 were dashed, with a late flurry of visitors’ pressure unable to find a breakthrough as Frankfurt secured their place in Seville.