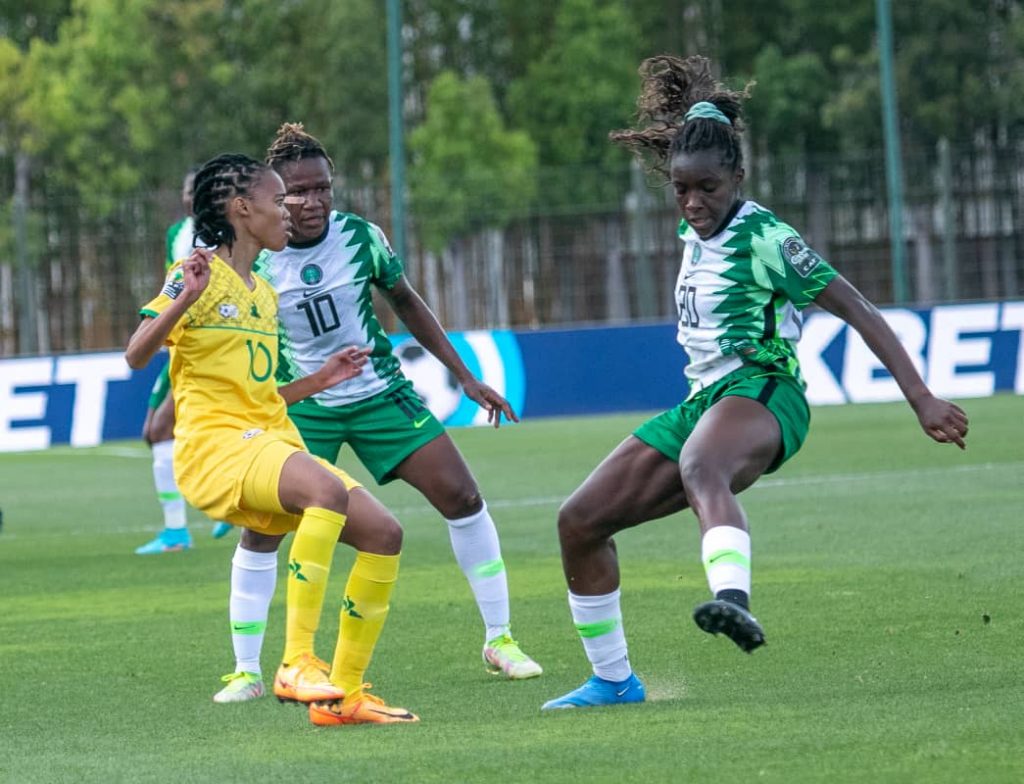 Nigeria Super Falcons began their Africa Women Cup of Nations AWCON 2022 title defense on a poor note as they suffered a 2-1 to Banyana Banyana of South Africa in their Group C opener.

The Super Falcons who were hoping to avenge their Aisha Buhari invitational tournament loss on the Banyana Banyana had to lick their wound again at the Stade Moulay Hassan, Rabat.

The nine-time Champions under new head coach Randy Waldrum who was guiding the Super Falcons to the AWCON for the first time would have themselves to blame after they missed most of their chances in the first half.

The Banyana Banyana made use of their youthful squad to curtail the Super Falcons shutting out Asisat Oshoala from holding the ball.

South Africa’s goalkeeper made some good saves to keep her team from conceding heading to the break with the Super Eagles getting the better side of possession and had two shots on target with four corner kicks as the first half ended 0-0.

Super Falcons returned to the game looking to break the deadlock, but Banyana Banyana goalkeeper Dlamini denied them an early lead after the restart.

South Africa finally got the chance they have been waiting for in the 60th minute, as Jermaine Seoposenwe outpaced her marker to give the Banyana Banyana the lead.

Rasheedat Ajibade almost pulled one back for the Super Falcons but her effort was easily gathered by Dlamini.

Waldrum brought in Uchenna and Francis Ordega to replace Ifeoma Onumonu and Oshoala in a bid to fight back.

But it was Atletico Madrid Feminine forward, Ajibade who scored in added minutes to reduce the deficit as the Super Falcons suffered a loss in their opening Group C game.