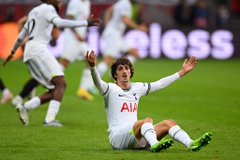 Tottenham was limited to a scoreless draw against Eintracht Frankfurt in the UEFA Champions League UCL on Tuesday night as a result of several wasted opportunities.

The visitors put in a generally encouraging performance but were let down by poor finishing.

They were looking to bounce back after losing to Premier League rivals Arsenal over the weekend.

Ivan Perisic saw a deflected shot fall just wide of the far post before halftime, while Harry Kane came agonizingly close to converting a Son Heung-min cross before swatting a shot over in the first half.

Hugo Lloris had to make a quick save to stop Ansgar Knauff from scoring on a close-range volley, and Jesper Lindstrom missed a fantastic opportunity to score while the hosts also had opportunities.

Later in the game, the action slowed down since neither team seemed eager to take chances and try to win.

With four points after three games and two points behind Sporting Lisbon, who lost 4-1 at Marseille earlier on Tuesday, Tottenham is now in second place in Group D.