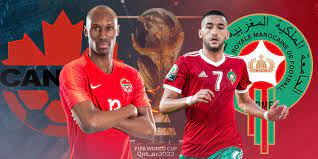 Morocco could join Senegal as the second African country to reach the round of 16 at the FIFA World Cup in Qatar when they take on Canada.

The Atlas Lions stunned Belgium in the second group game after a goalless draw with Croatia in the opening game.

Their opponent, Canada have nothing to worry about but would play for pride.

Canada make four changes to the side that lost 4-1 against Croatia in the last game.

The big news is that skipper Atiba Hutchinson and star striker Jonathan David have been dropped to the bench. Ritchie Laryea and Stephen Eustaquio also miss out.

Goalkeeper Yassine ‘Bono’ Bounou, who was named in the starting line-up but then taken ill during the anthems, returns in goal in place of Munir Mohamedi.

Former Huddersfield town winger Abdelhamid Sabiri gets his reward for scoring scoring in the that, coming in for Selim Amallah.