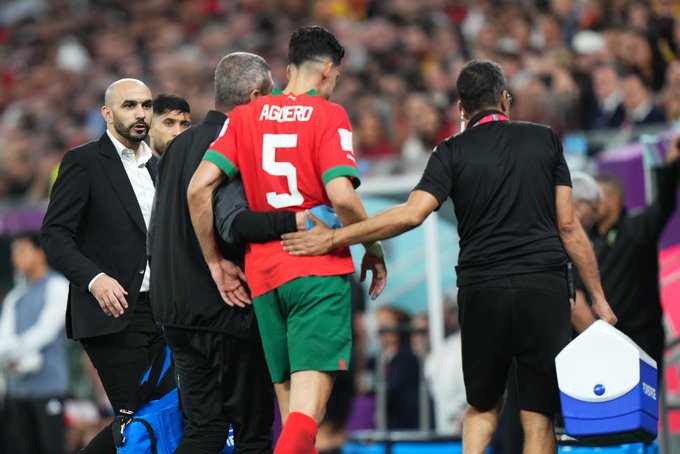 After limping off in tears during Morocco’s last-16 victory over Spain, defender Nayef Aguerd faces a race against time to recover in time for Saturday’s World Cup quarterfinal matchup against Portugal.

Aguerd has been a key member of Morocco’s surprising run to the final eight, making it the first Arab nation to do so.

Team officials said Aguerd will need extensive treatment for what they believe to be a thigh injury before they can determine whether he will be ready for the weekend.

Read Also:Joe Cole perfectly sums up why Morocco star Hakim Ziyech does not shine with Chelsea

When he was removed from the field toward the end of the 90 minutes against Spain, the center defender was upset.

After extra time, Morocco continued to hold out for a scoreless tie before winning the penalty shootout that followed the game.

After joining West Ham United from French club Stade Rennais for approximately 30 million pounds ($36.50 million), the 26-year-old has struggled with injuries this season.

After having surgery for an ankle injury sustained in a pre-season friendly against Rangers, he returned to play in a League Cup game last month before seeing action for 75 minutes as a substitute in West Ham’s final Premier League encounter against Leicester City on November 12.

After the physical strain of the Spain victory, Morocco offered their players a second day of rest on Thursday.

Sofyan Amrabat, a midfielder, said after Tuesday’s victory in a sad televised appearance that he played despite having a back problem.

“I was working with the physio until three o’clock in the night trying to do all I could to play. In the end, I had to have an injection to play. I just couldn’t let those guys and my country down,” he said.

Morocco captain Romain Saiss was also struggling towards the end against Spain and was bandaged up but completed the match.